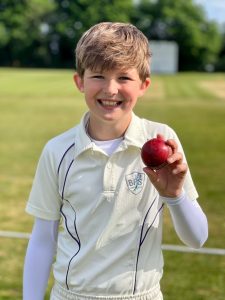 Last weeks Colts A cricket match was notable, not just for the match victory, but for some spectacular individual performances from two of the team.

A steady 35* from Felix helped achieve a respectable first innings score of 110 and the run chase from the opposition was over before it began, with Harry taking 4 wickets for just 3 runs in his opening spell, returning later in the innings to claim his fifth (and his first ever 5 wicket haul), leaving them short on 75 runs.

Reflecting on the game, Harry said, ” I never knew anything about a five wicket haul before the game, but when I was told I could win the match ball and was given an opportunity to take it, I was buzzing!”